For the first time ever, ESPN College GameDay announced they were coming to Pullman for the WSU vs. Oregon game! And there was ABSOLUTELY NO WAY we were going to miss this!!!

Lainey and the rest of us were up shortly after that.

Lainey announced that this was “the biggest day of our life.” Not an exaggeration. 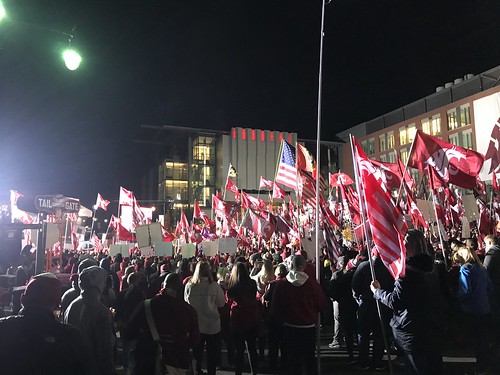 As we got closer to campus at 5:30 a.m., we could hear the rumbling of the crowd. ESPN predicted there were close to 30,000 people there. AMAZING!! 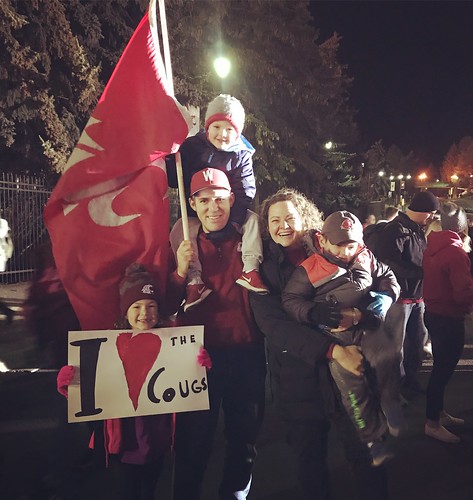 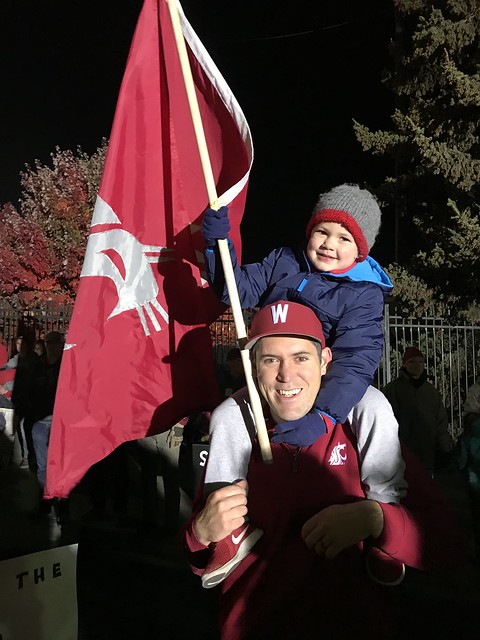 I enjoyed waving the flag. Ol’ Crimson (the Cougar flag) has been waved for the past 15 years at every ESPN College GameDay across the country. So you’d better believe that there was hundreds upon hundreds of Cougar flags this morning. 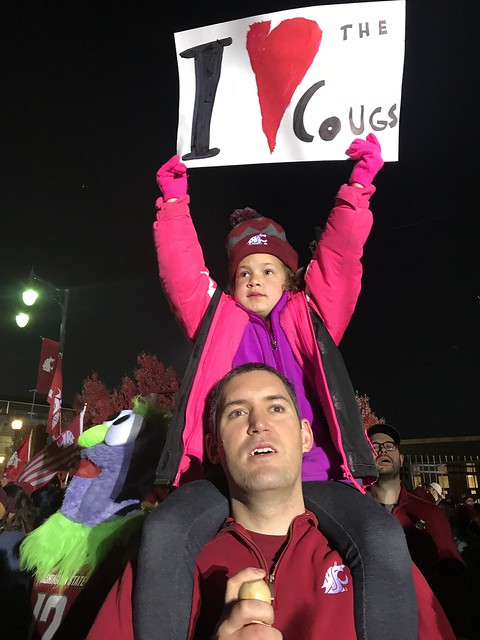 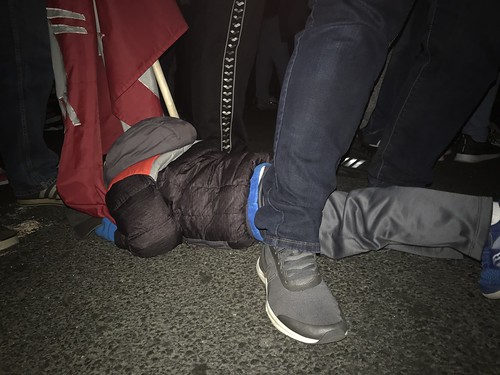 And Brody loved whining/crying while laying face down on the ground. You can tell he especially loved this experience. 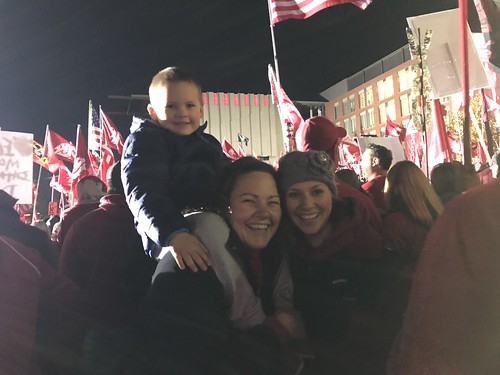 We found the Evanoffs in the midst of the crowd!

There are no words to explain what it’s like to be a Cougar fan. The crowd is the biggest College GameDay has ever had. Several of the announcers said this might be their most favorite show yet. LOVE IT!! Cougar nation is so proud. 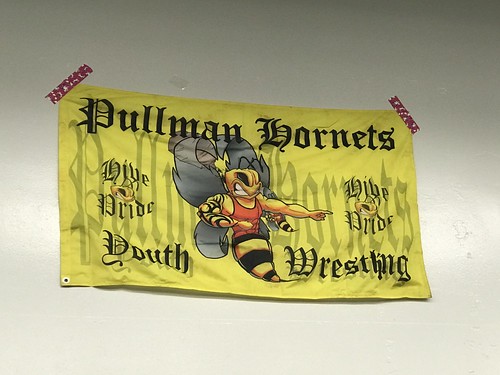 We could only stay at GameDay until 7 a.m. because I had my first wrestling tournament in Potlatch! Go Pullman Hornets! 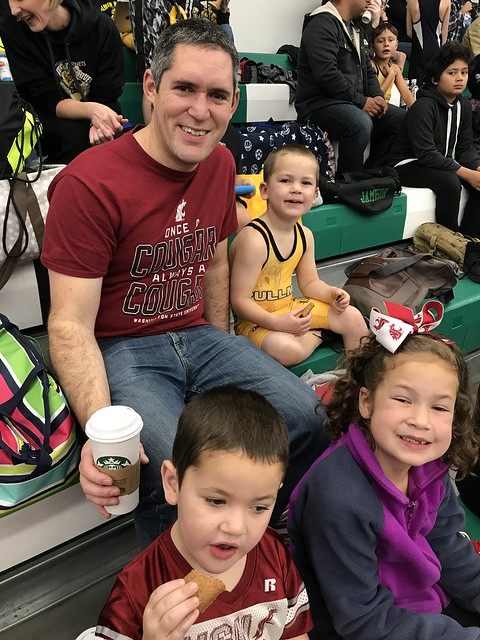 After I weighed in, we hung out in the bleachers until it was my turn. 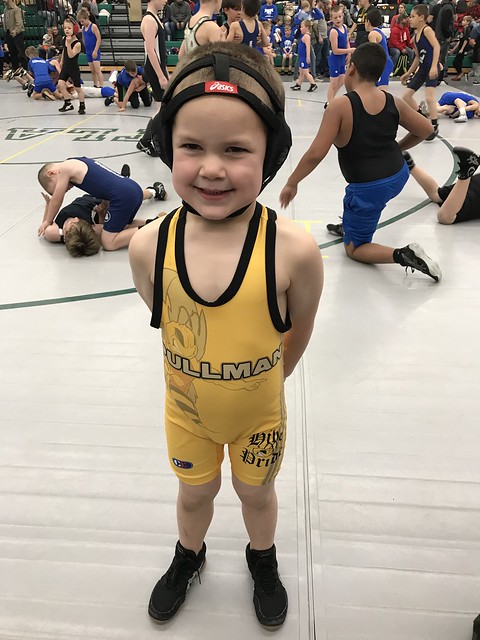 I was in group one, which is the youngest group. 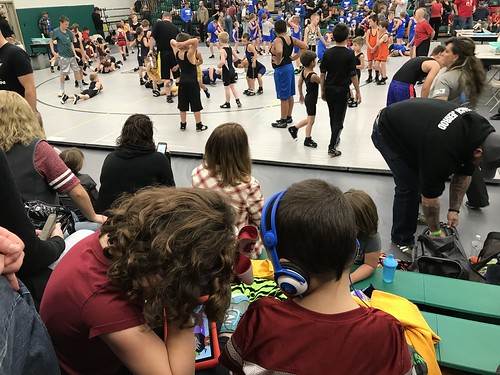 Lainey and Brody got in a lot of Kindle time today. There were 287 kids in this tournament, so it was a loooooong day.

Here is match one. There are typically three rounds in a match, unless you get pinned. Then you automatically win. (However in my group with the little guys, even if you get pinned, they let us go through the full three rounds so we can experience it.) I pinned my opponent in rounds two and three. I won this match! 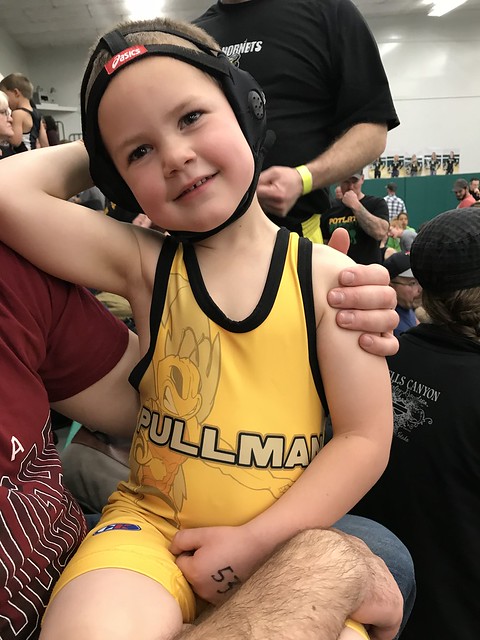 Hanging out with Daddy in between matches. 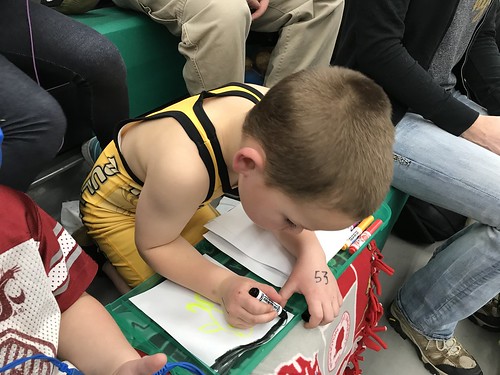 Match two. You can hear my coaches helping me out. I never pinned him, but I ended up with the most points at the end of round three, so I won this round! 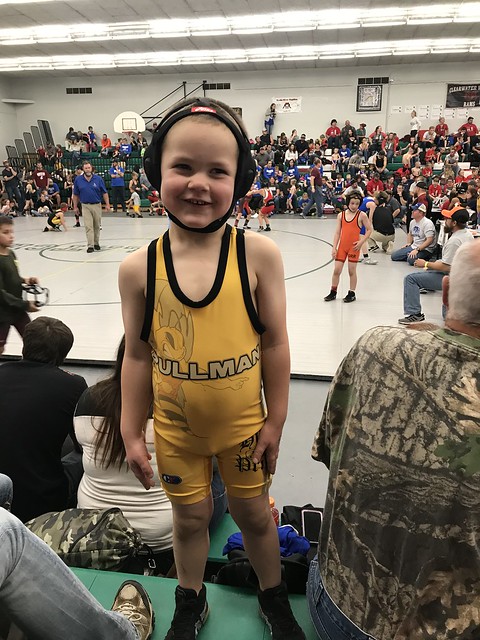 The cutest wrestler there ever could be. (Or at least that’s what Mommy thinks.) 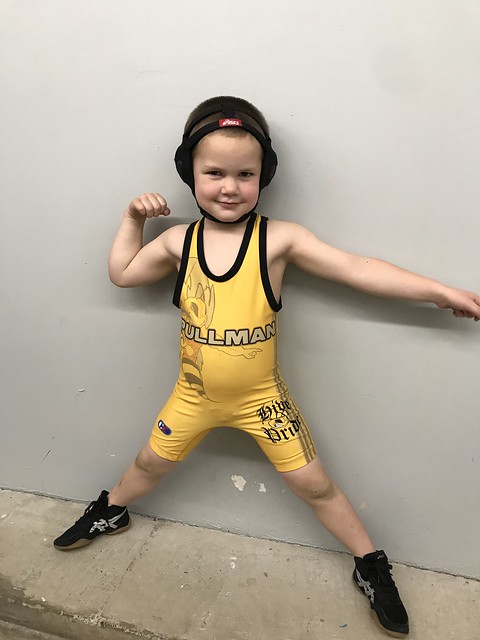 My third and final match! I pinned my opponent in the third round (and also had the most points), so I won. This means I got first place in my age group!!! 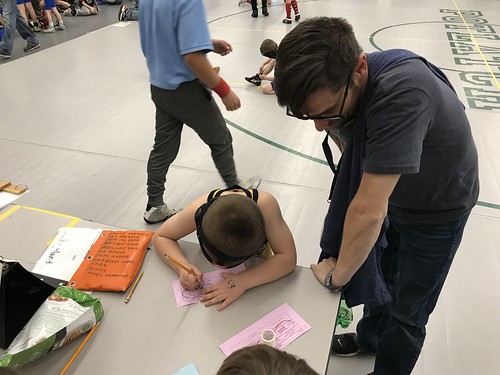 Signing my paper with one of my coaches after my last match. Mommy had to leave at 2:15 to get Brody back home to the babysitter. Daddy waited with me until 3:45 with the hopes I’d get to claim my first place medal at the award ceremony, but the tournament still wasn’t over, and the Cougar game was starting soon. So my coach said he’d grab it for me, and we jetted off to meet Mommy and Lainey in Pullman. This was a GREAT first tournament!! 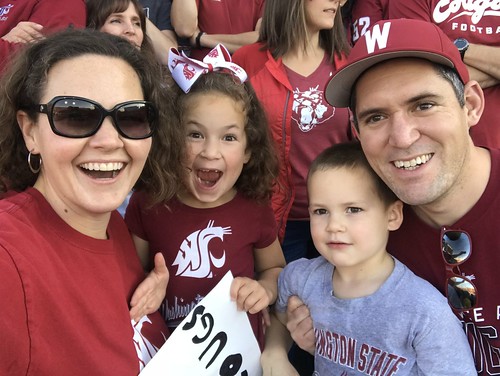 We were hustling, and managed to only miss the first minute of the Cougar game. (Mommy and Daddy gave each other big high fives when we made it to our seats. Phew!) 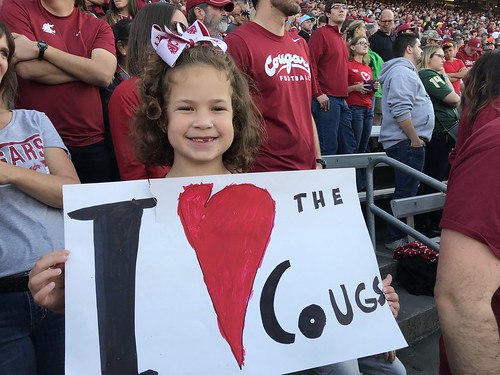 The Oregon Ducks were ranked #12 and the Cougs were #25. This game got INTENSE, so we helped by making lots of noise.

We were up 27-0 at halftime, but we really thought about letting the Ducks win in the third quarter. So by the fourth quarter, the Cougs needed us! 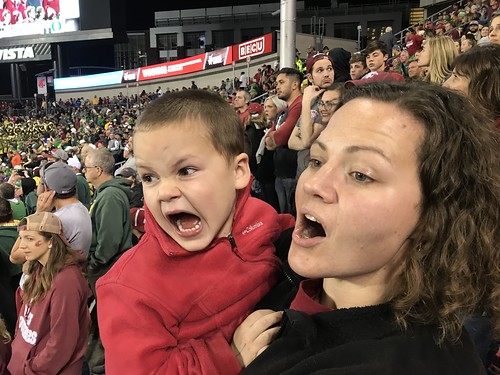 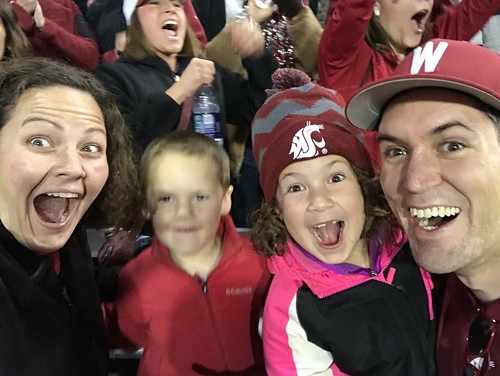 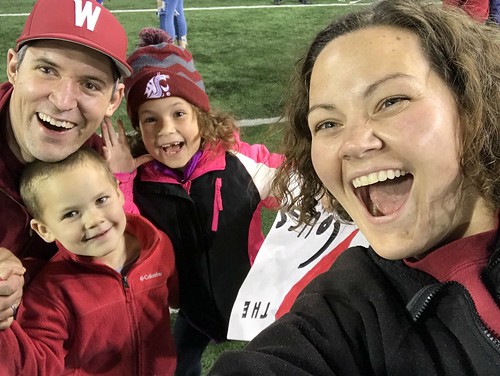 Everyone rushed the field, so we didn’t want to miss out!! 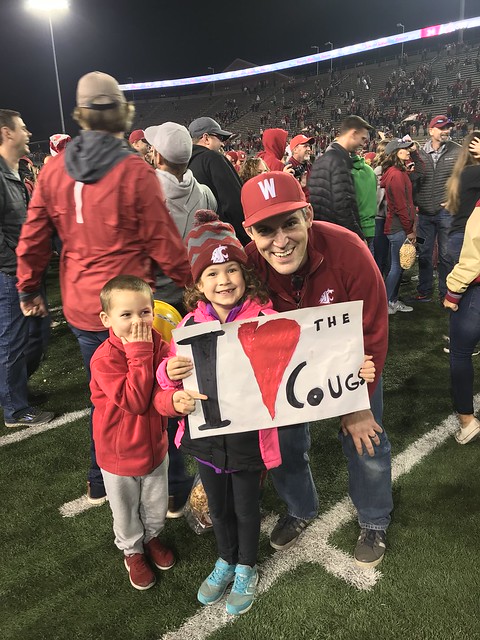 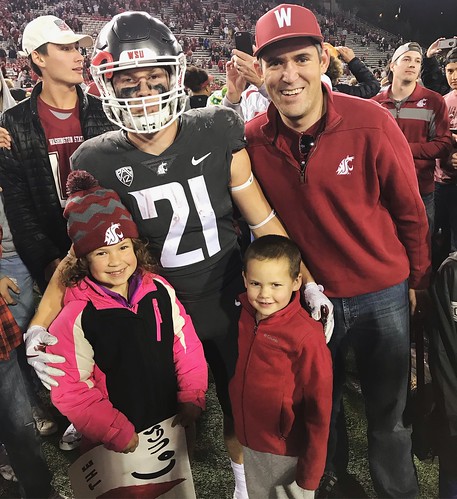 We even got a picture with running back, Max Borghi, who is one of the most talented true freshman we’ve had in a long time! We woke up today to find out that we’re now #14. GO COUGS!!!!

This was easily one of the most exciting days Pullman has ever seen. And one of our favorite days. ESPN College GameDay, winning my wrestling tournament, and watching the Cougs beat the Ducks for the fourth year in a row! Doesn’t get much better than this!!!!