We flew in to Chicago last night, and then drove five hours to Great Grandma and Great Grandpa’s house. We arrived close to midnight, but it was so nice to be able to wake up here on Christmas Eve! 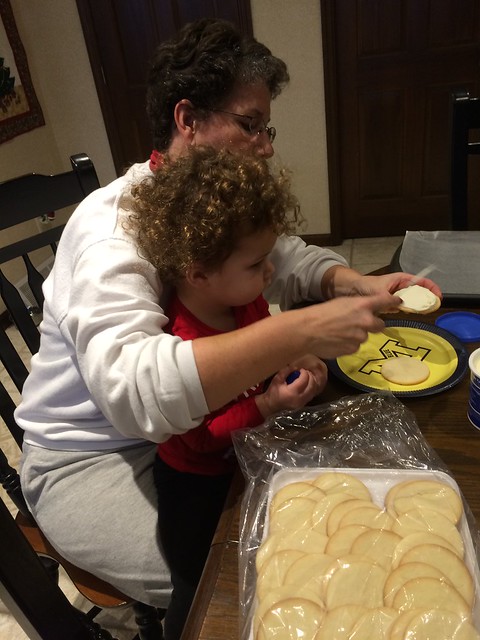 After a delicious breakfast, we decorated some sugar cookies. Great Grandma ordered ten dozen cookies, so let’s hope we have enough. 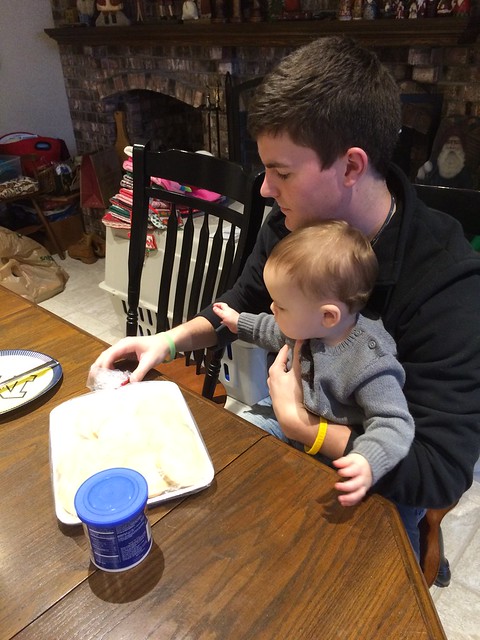 Uncle Jared tried to get Henry in on the action, but Henry just wanted to eat the plate. He had to go play elsewhere. 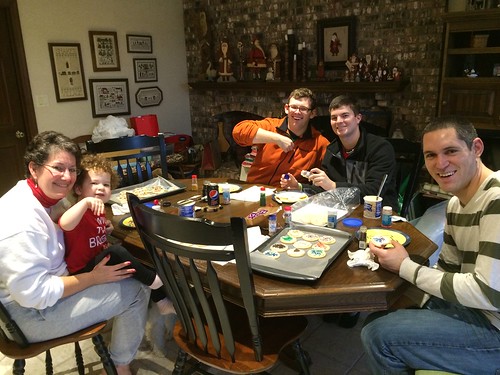 After cookie decorating and naps, it was time to go to the Christmas Eve service. We took some pictures by the tree in our fancy Christmas outfits. 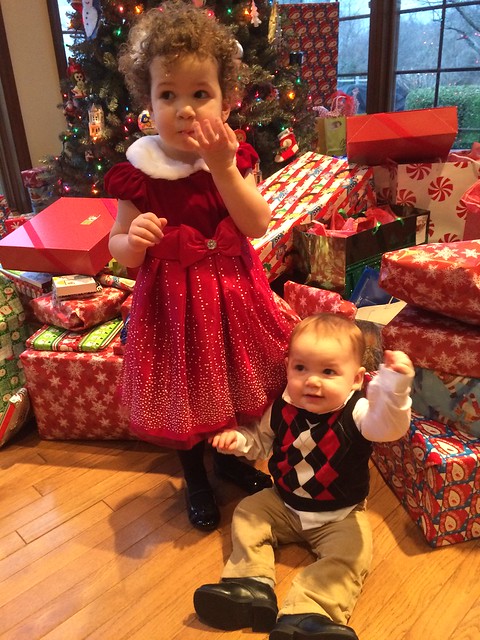 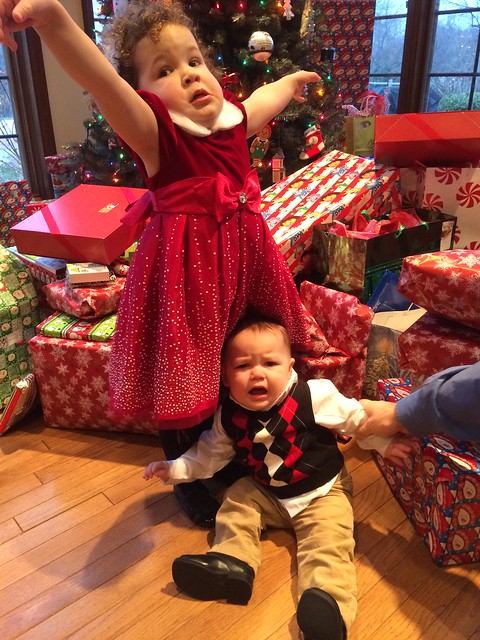 We weren’t exactly the most cooperative. This is what I did when asked to smile. Makes sense to me. 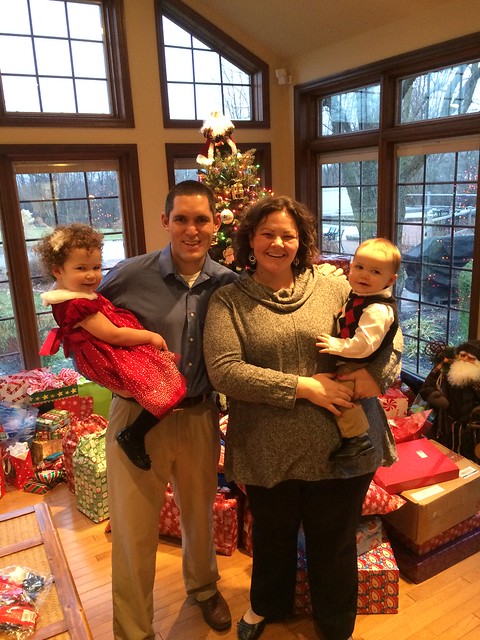 We did give a couple of smiles for Mommy and Daddy. 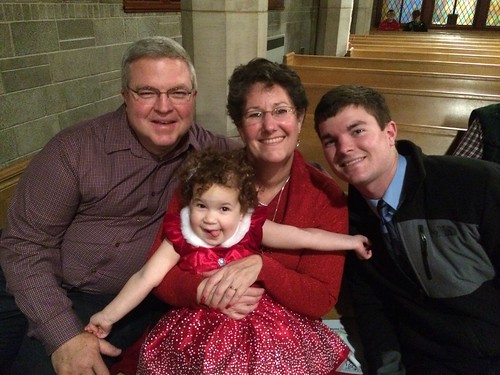 When we got to church, I sat with Grandma and Grandpa (and once again gave another of my best smiles). 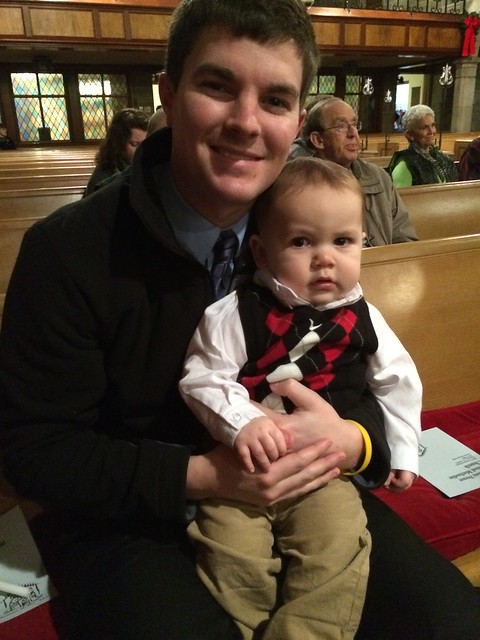 Henry sat with Uncle Jared until he got fussy. Then Uncle Jared quickly gave him back to Daddy. (Apparently he doesn’t want the maximum amount of bonding time with his nephew.) 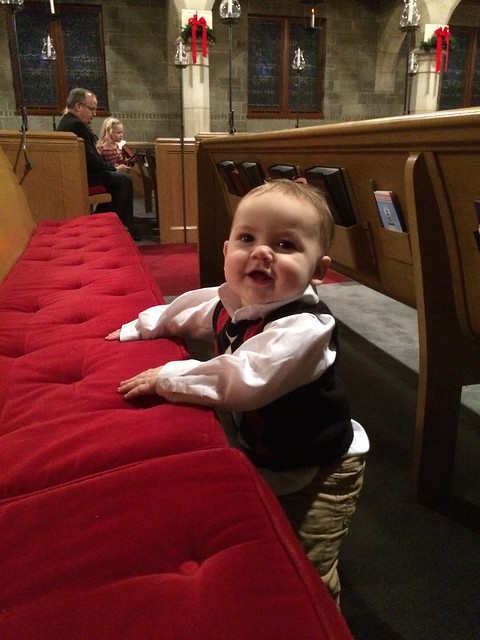 For the majority of the service, Henry crawled around and ate anything he could find on the floor of the church. 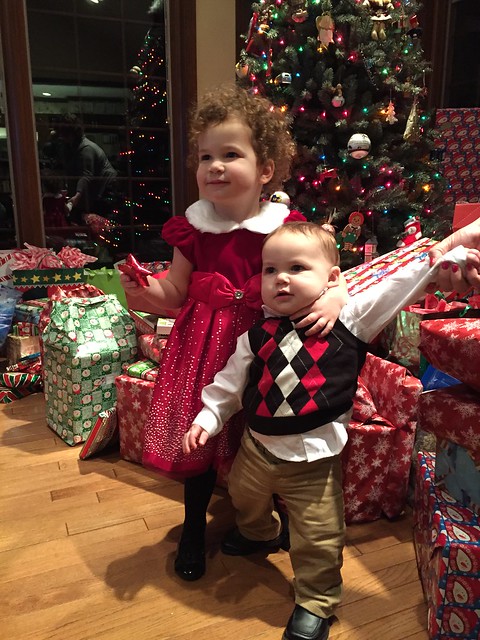 Once we got home, we got a few more pictures. Henry and I were a little more cooperative this time. 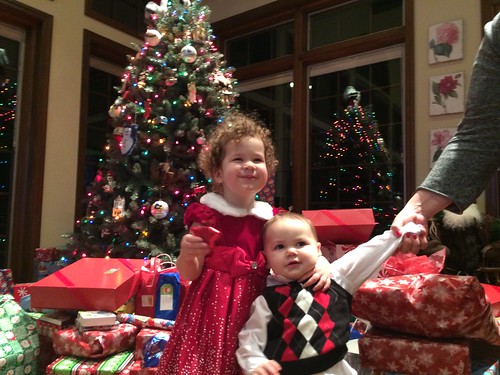 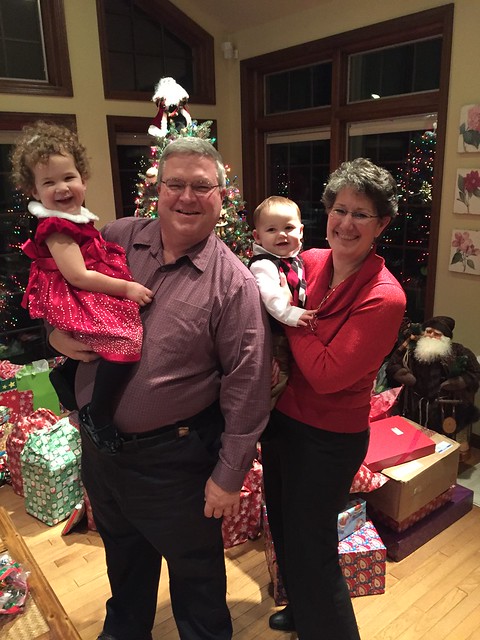 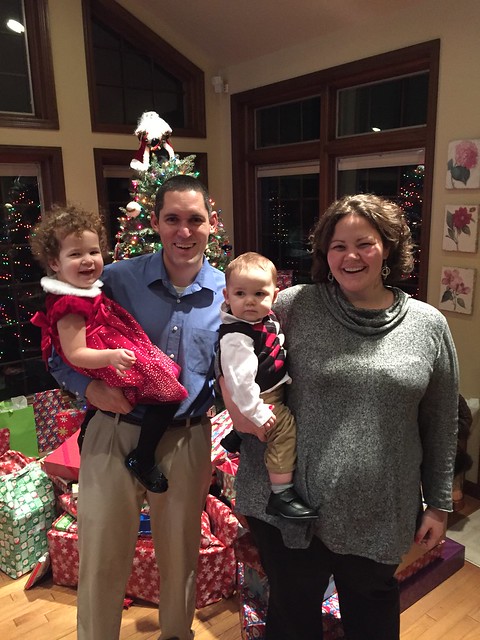 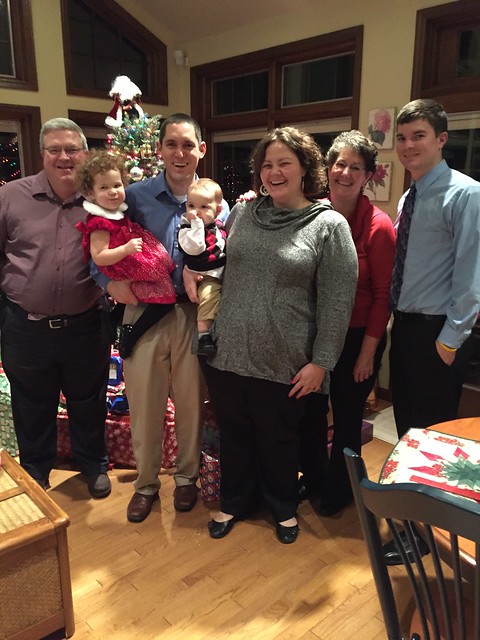 The Steck side of the family! (Uncle Jeff flew in from Florida, and arrived a few hours after this picture was taken. Uncle Matt, Aunt Elisa, and my cousin, Graham, are coming the day after Christmas.) 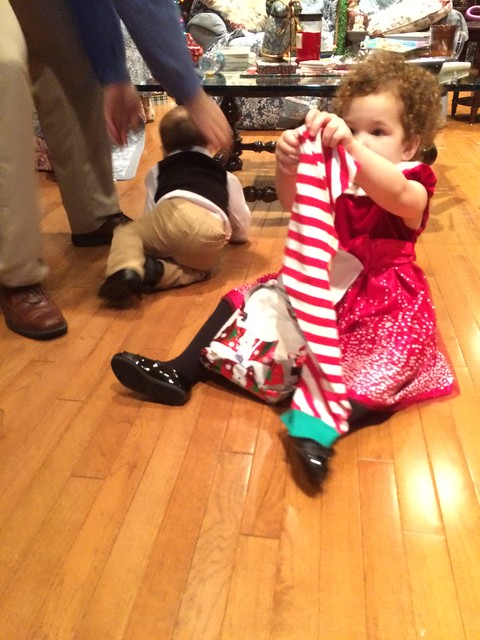 After pictures, we were excited to learn that Santa had brought one present for us to open tonight! (You can tell that Henry was highly interested.) It was Christmas pajamas and a Christmas book! 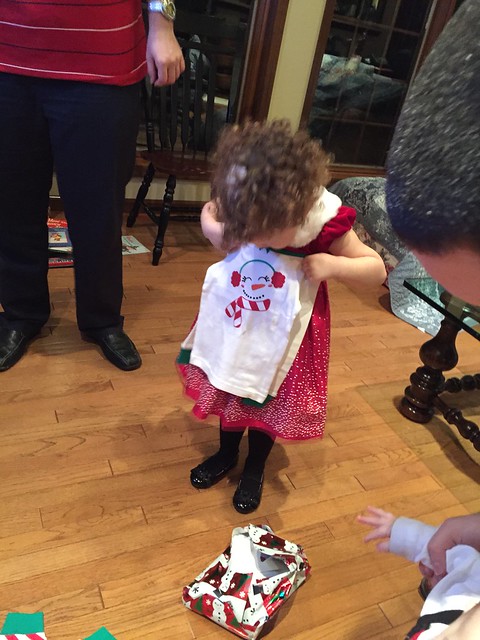 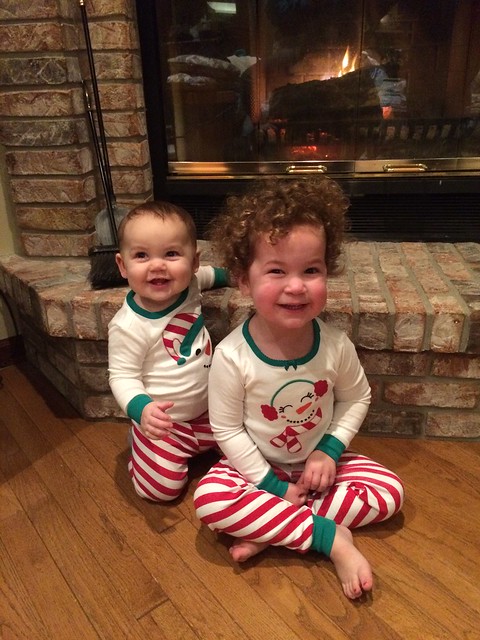 We put on our PJs and took a picture by the warm, cozy fire! 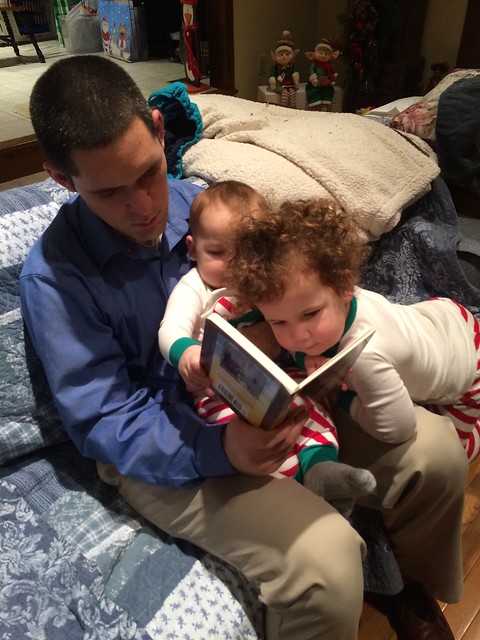 We sat right down with Daddy to read the book! 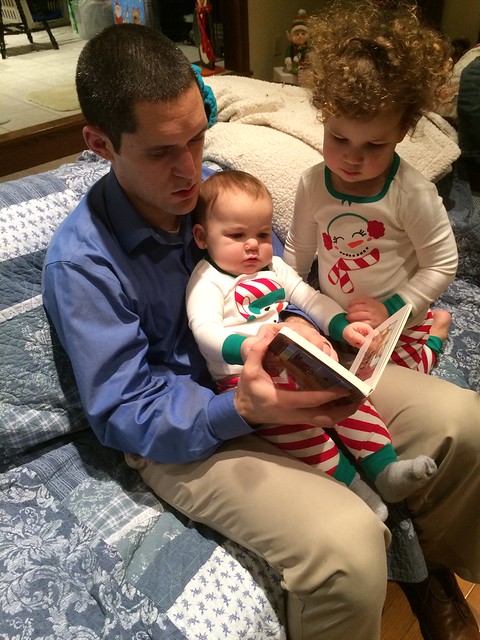 By the end of the book, Henry was struggling to climb out of Daddy’s lap, and I was rolling on the floor with another book. Oh, well! I’m sure we’ll appreciate this tradition at some point. 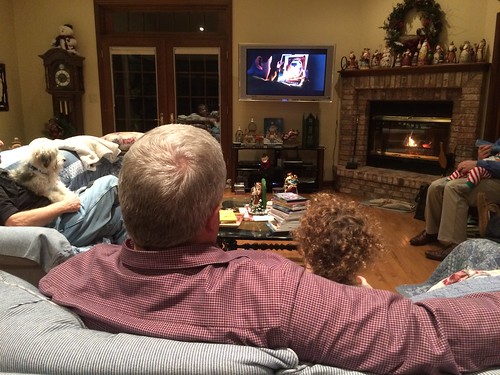 Once Henry went to bed, we watched “Polar Express” while eating Christmas cookies. 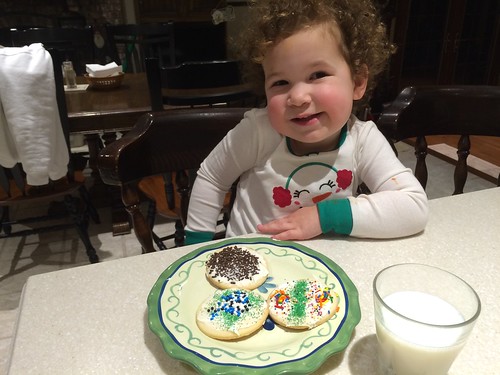 And we ended the night by leaving out cookies and milk for Santa. I won’t say that I’m thrilled with the idea of scary Santa creeping around the house while I’m sleeping, but I’m sure I’ll be excited to see all of the presents in the morning. I can’t wait for Christmas!!!!!!