On Sunday, we left St. Louis to head to Quincy, Illinois to visit my Great Grandma and Great Grandpa Adams. 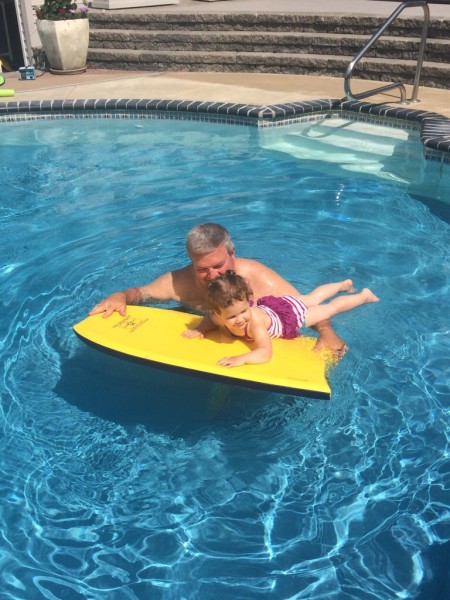 Within ten minutes of arriving at their house, I was in the pool.

Grandpa and I had lots of fun together. I was one happy girl. 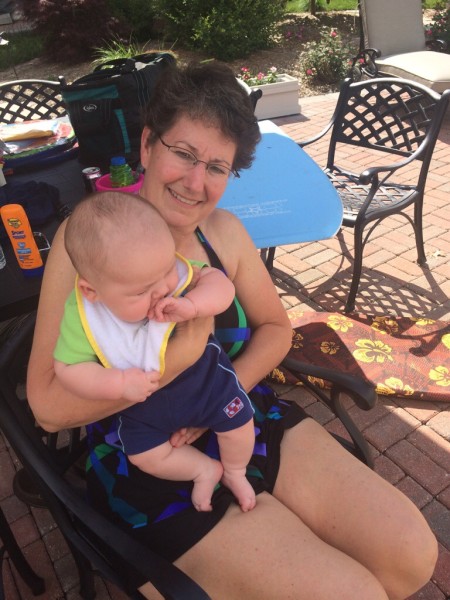 Henry hung out with Grandma for awhile.

Then he went to see Grandma and Grandpa Adams.

It was his first time meeting him. They were amazed by his “robust” figure. 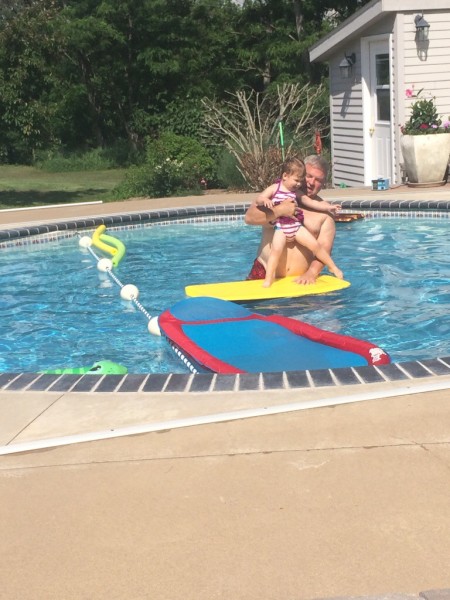 I got in some surfing practice with Grandpa. I sure kept him on his toes. I would attempt to dive off of the pool toys or squirm out of his arms in the blink of an eye. I just wanted to make sure he wasn’t bored. 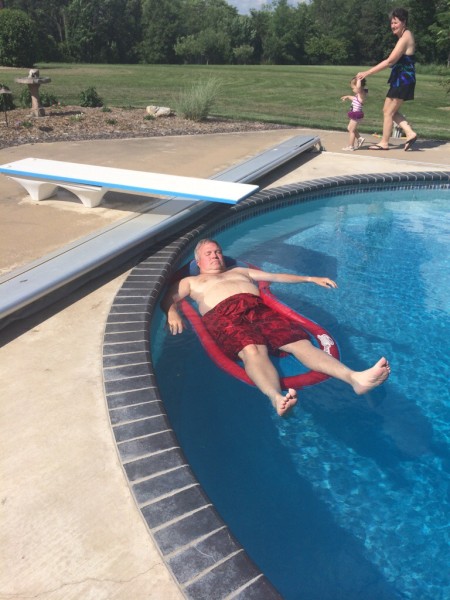 After wearing Grandpa out, he needed a break.

So I went to play with Grandma.

And I also painted the pool deck. This took some major concentration. 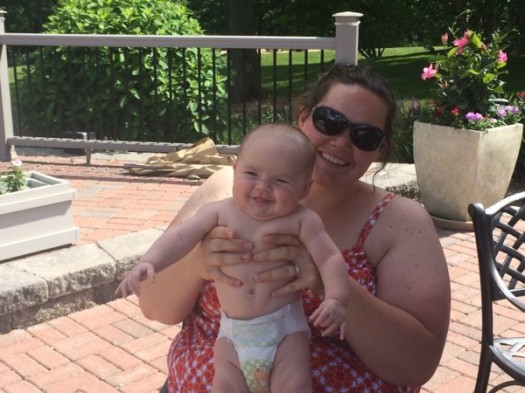 Henry eventually made his way back to Mommy to enjoy the warm weather.

Once inside, Henry enjoyed some time in the Bumbo. He loves this. And I love that he can sit up and interact with me. Before I know it, he’ll be mobile and we’ll be fighting over toys! 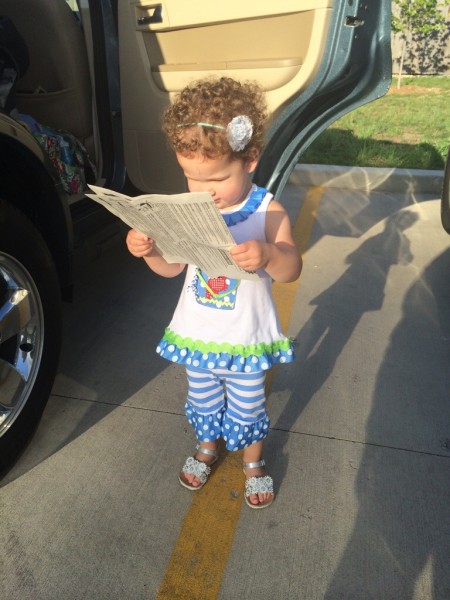 We headed to dinner that evening, and I insisted on catching up on the local news before heading in to eat.

Grandma Adams bought a tricycle to keep at her house so her great-grandkids could use it. I needed a helmet, so she went out and bought the BEST. HELMET. EVER. for me to use.

Grandma helped to push me up and down the driveway. I loved it! 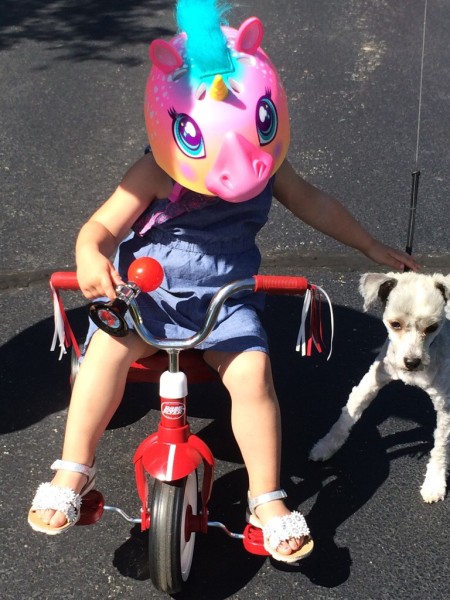 The puppies accompanied me on the trip down the driveway, so I had to make sure to stop to pet them.

After the bike ride, we went to get some frozen yogurt. Yum!

Grandma joined me at the kiddie table.

Ryan, Lori, and Brittany joined us. Great idea! I’m always up for a special treat. 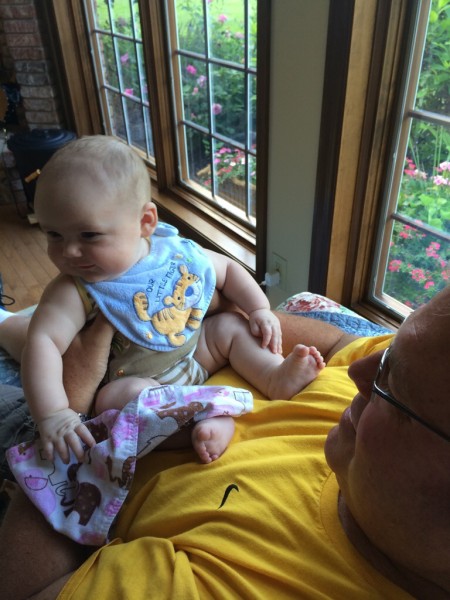 Taking a break with Grandpa. 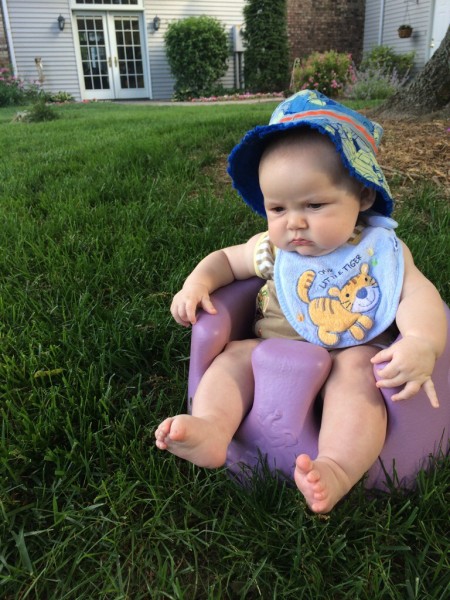 Then we headed outside to play a bean bag game. Henry came along to join in the fun! 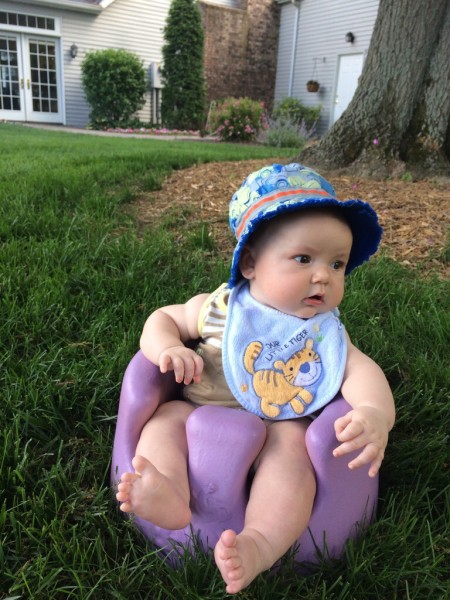 I was a big help. If the bean bag didn’t make it in the hole, I helped them out.

Grandma managed to win (with Grandpa on her team as well) while holding Henry. She’s one talented woman.

Mommy and I took a break from the game to draw with sidewalk chalk.

Mommy and I spent some time watching the clouds go by. 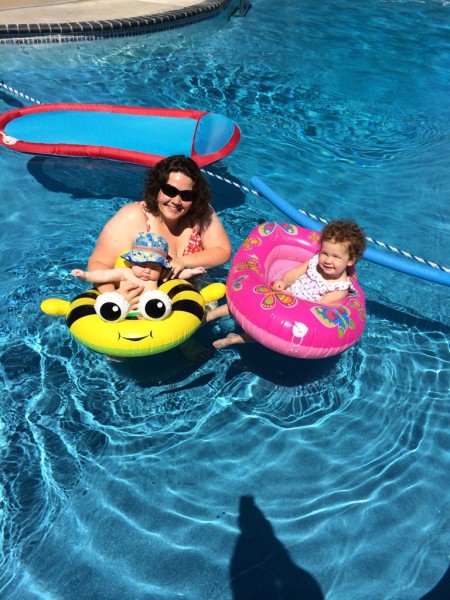 Before we left the next day, we got out to the pool. It was Henry’s first time swimming!

He didn’t like being in the float toy as much as he liked floating on his back. 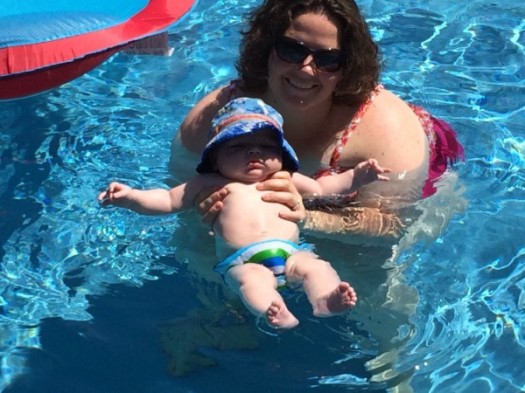 After days of going, going, going…I just had to take a nap. This has been one eventful vacation!