We got to go to a St. Louis Cardinals game today! It was the first Cardinals game for both me and Henry. I was so excited that I’ve been talking about this nonstop for the past couple of days! 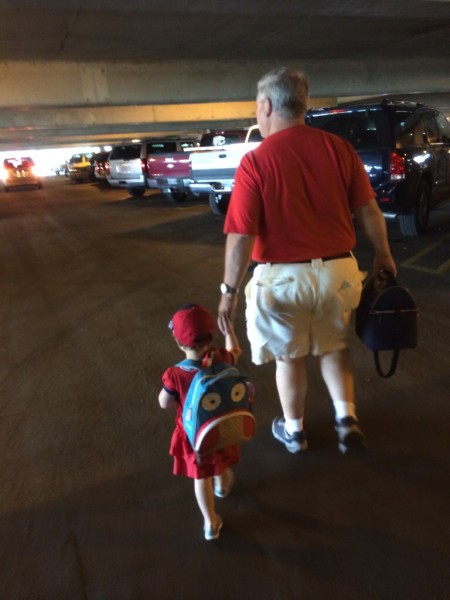 We drove downtown and parked in the garage. I made sure to wear my best Cardinals gear and bring my backpack full of activities.

Busch Stadium! It’s about time someone brought me here!

Henry didn’t look quite as thrilled to be there, but in his defense it was 90 degrees and incredibly humid. 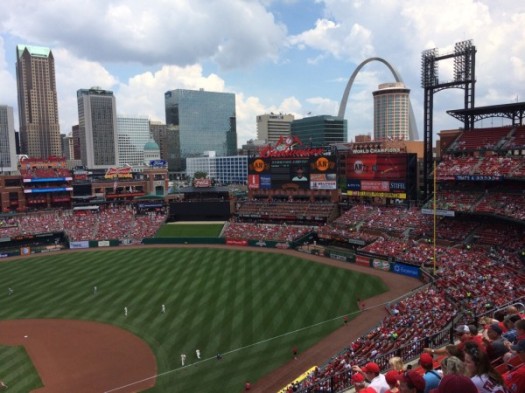 Inside the stadium! Mommy loves this place!!

Henry fell asleep on our way into the stadium and slept until the fifth inning. 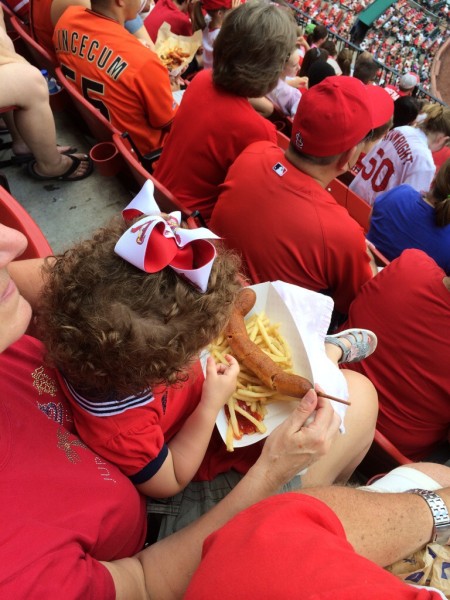 I got to eat some yummy stadium food. Of course I just wanted to use the fries to eat ketchup. Mommy was sure happy she spent $12 on this meal for me. 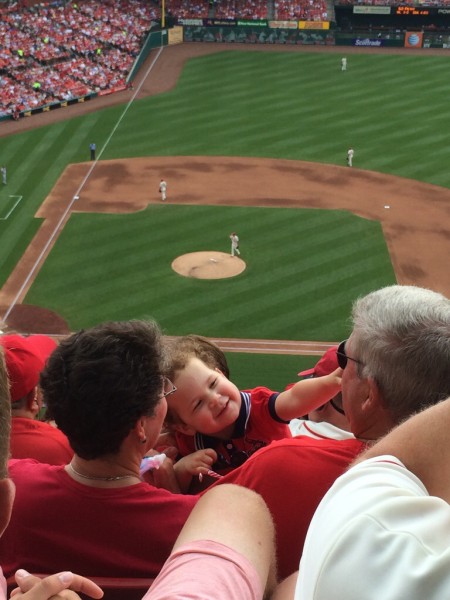 While Henry slept, she had to stand a few rows up with him, so I played with Grandma and Grandpa. We had lots of fun together (while they caught snippets of the game). 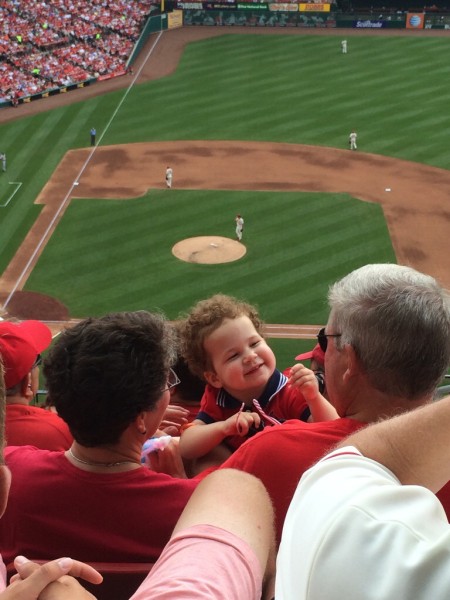 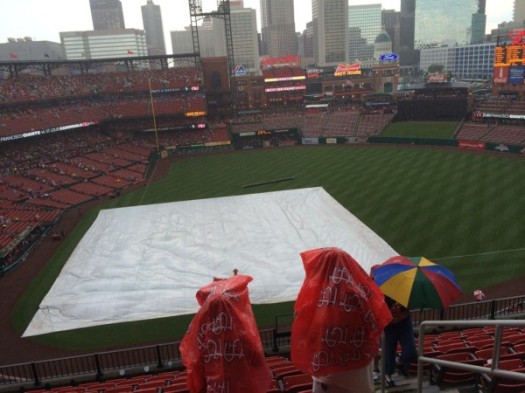 Then the clouds moved in and it started raining. Boo.

No one was happy about the rain delay.

I entertained myself with some coloring.

But then the thunder and lightning really picked up, so I decided that I should probably be near Grandma just in case she got scared.

The rain finally stopped and Henry woke up, so he came to sit with Grandma. 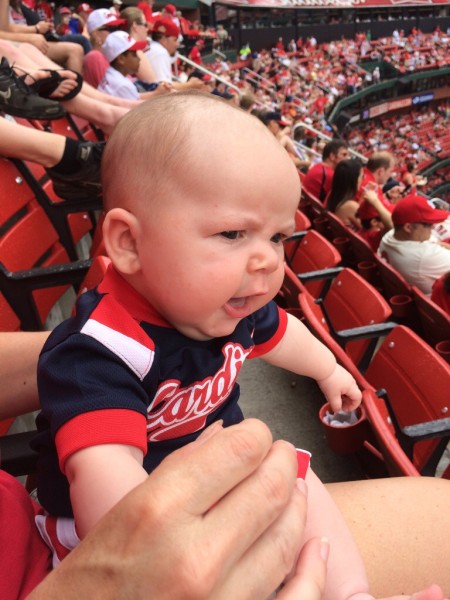 He yelled at some Giants fans sitting near us.

Then he proceeded to stare them down.

This kid is a true Cardinals fan.

When I wasn’t watching the game, I entertained myself with stickers.

Mommy and I also took some silly pictures together.

Then it was time for the clouds to roll in again and let loose. A second rain delay. 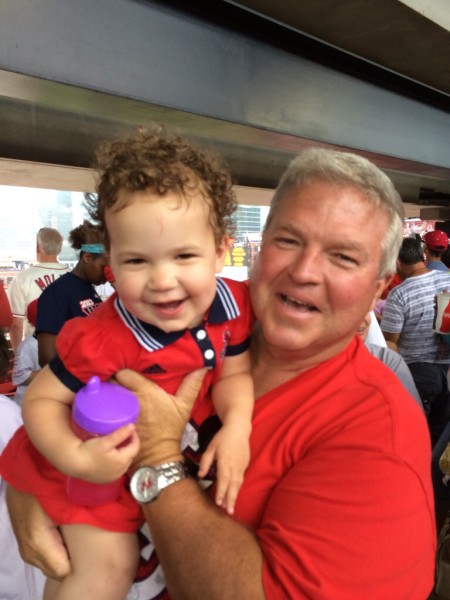 Mommy and I had to run to the bathroom, so I got a little wet in the pouring rain. Since the game had been going for three hours now and we were only in the sixth inning (and on our second rain delay), we decided to leave to meet everyone at Uncle Dave’s house for dinner. We were able to finish watching the game there and the Cardinals won! Yay! 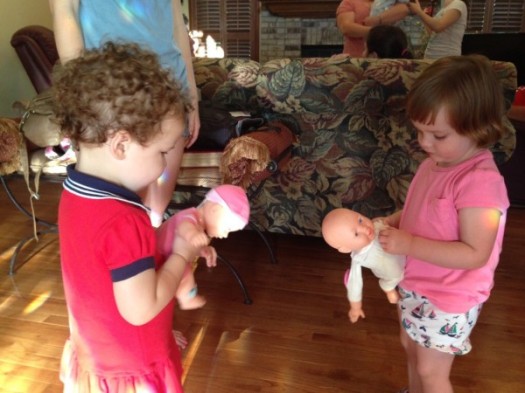 Samantha and I had more time to play while Uncle Dave made some incredible burgers! 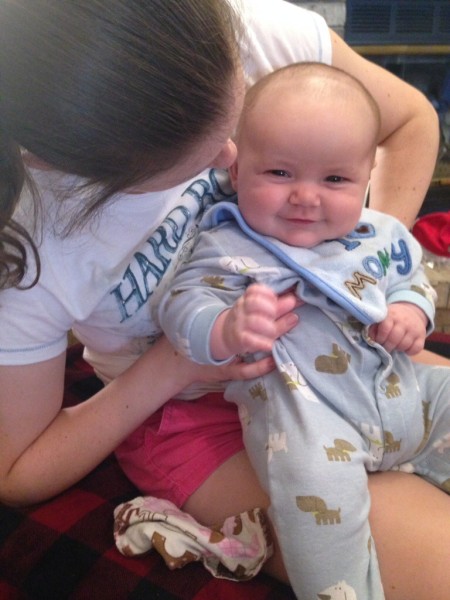 Henry and Lauren spent some time together (and he redeemed himself by not covering her in spit up). 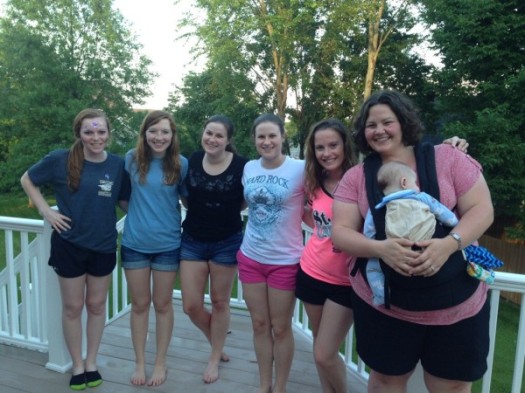 After dinner, we got some final pictures of the cousins together. Emily joined us for the day and has a beautiful face full of stickers complements of Samantha and myself.